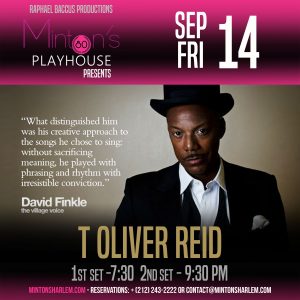 A Native of the small town of Gastonia North Carolina, T. Oliver has been performing since he could walk and talk. The youngest of 4 children…he began singing in the choir of St. Stephen’s AME Zion church, as part of a very musical family.

By the age of nine he had terrorized his family enough by singing the entire cast recording of “Annie” every afternoon and soon found himself on the stage of The Little Theater of Gastonia in the musical, “Shenandoah”, thanks to Debbie Rhyne and George Gray, beginning a loving and nurturing relationship with performing that has lasted 30 years and is still going strong.

After Graduating from high school, he was awarded a scholarship, talent based of course, to The University of North Carolina School of the Arts. While studying Music with a focus on Vocal Performance, he had the privilege and great fortune to study with Frederick Moses, Phyllis Tektonidis and Glenn Seibert who taught, not only, technique but the artistry of good musicianship and self preservation. During his experience at UNCSA, he was also lucky enough to study with Victoria Bussert, David Craig, Gerald Freedman, Matilda Nichol, Duncan Noble and Melissa Hayden

Two days after graduating with a Bachelor’s degree in Music, he began work on the 2nd National tour of “Once On This Island”. T. Oliver subsequently performed in the 2nd national tour of “Guys & Dolls” and in other regional theaters before making his way to New York City and Broadway.

T. Oliver Reid is the winner of the Metropolitan Room’s “2010 Metrostar Challenge” and was also a featured artist in The 21st New York Cabaret Convention.