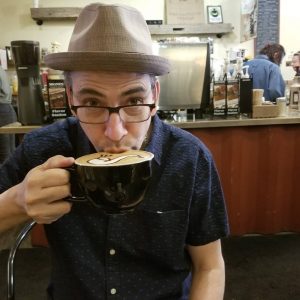 Daily habits. It’s a well worn notion that our daily activities determine what we accomplish and who we become. Count me among those that believe talent is over-rated and hard work is underappreciated. And even though I know this, it still is surprising and seems somewhat miraculous that an activity practiced twenty minutes a day over the course of a month or two can change my daily experience drastically. I find this true in everything from how I get along with my kids, to how I deal with stress, to the way my body looks and feels, but most importantly in my chosen career.  As a musician, 20 minutes a day on a particular skill can change the way we are perceived in our field and 2 hours a day can change the whole arc of our career. This week I am preparing for my fall season of practicing and teaching by reinvesting in the study of arguably the greatest improvising musician in history, Charlie Parker.

I was recently flipping through some old practice charts – I’ve always liked documenting my daily practice. I remember a time in the not too distant past when I was practicing playing through several “Bird” solos daily as part of my warm-up. So I was interested when I came across the practice chart in which I recorded this daily activity. I was a little alarmed when I saw the date of these entries – 2011. 2011?!!! I had the notion that this period in my development was much more recent. Then I remembered the impetus for this practice. It came about twelve years ago from a friend who is one of the great improvising voices on the scene today, who, while giving me a much appreciated compliment, suggested I learn some improvised solos of master jazz musicians. It was a comment that I had trouble processing. The compliment was juxtaposed with an apparent assumption that I hadn’t already learned many such solos, but I had. The realization that a musician whom I greatly respected did not hear in my playing that I had done transcription work for years was a wake up call to say the least. But rather than get offended, I asked myself how many solos I could play from memory at that moment. The answer was approximately zero. It honestly had been years since I had done extensive transcription work on my own. And that work was devoid of what I now know is an essential element in the transcription process: to imprint the solo permanently into our working repertoire. Heretofore I had always considered transcription important because it was a way to gather language in small chunks – a phrase or a lick here or there, to consciously adopt the vibrato, articulation, swing feel, and other sonic elements of the artist being transcribed, and to develop technique in general. But being responsible for knowing all these masterpiece solos by heart? That seemed a little out of my reach.

I know there are musicians with perfect pitch and/or tremendous musical recall who learn solos permanently on their first attempt. That just isn’t me. I had to learn to apply my daily habits and high level of discipline to replicate the mastery that some musicians have gained over the material with (apparently) much less work. And the answer is repetition. Play something from memory every day for a month or several months on end until it because as familiar to you as your favorite song. This process takes all the advantages of transcription and multiplies it by 1000. After a year of more disciplined transcription, the reception I received as a musician changed drastically. I have had the great fortune in the past few years of being hired by some of my heros. They hear musical detail that was lost to me until I started taking transcription to this next level. Improvising musicians who seek to make their own mark within the umbrella of jazz music must learn their repertoire so thoroughly that it oozes out of them spontaneously as their own. Having Charlie Parker’s language so completely under you fingers is like an author having all the great writing of Shakespeare, or Dostoevsky completely accessible throughout their writing process.

The goal for this next two weeks is to refresh about ten important Bird solos to the point where I can play through them up to tempo. This will entail a lot of work. But once accomplished, the practice of playing through these ten solos will probably take less than twenty minutes.  Then the goal will be to play them everyday first thing in the morning like a cup of coffee. I plan to continue this daily through the end of the year.  I hope my students are ready to be all about Charlie Parker this fall.